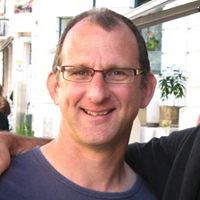 My research interest is the early Earth, how it formed, how crust developed on the surface and changed over time, and how life gained a foothold on our developing planet. Specifically, I am interested in how the changing Earth system co-evolved with the biosphere through time. My main field-based research in the Pilbara region of Western Australia.

I am a Professor of Geology, with 28 years of mapping and research experience in a variety of structurally complex Precambrian terrains. My main interest is on the early history of the Earth and I have developed an international reputation for my work on Archean tectonics and the geological settings of early life on Earth. More recently, as Chair of the Precambrian Subcommission of the International Commission on Stratigraphy, I have commenced a wholescale review of Precambrian stratigraphy with the aim of revising the Precambrian timescale. My particular skills are mapping and the ability to integrate a wide range of geological data into 4-D models, from the craton to micrometre scale.

My research on early life has established a connection between the earliest putative fossil remains and low-temperature hydrothermal systems, and recognised that life in the early Archean was already diverse, occupying different niches. Through mapping and collaborative laboratory research, I have developed new and comprehensive geological models for the environments of Earth’s oldest fossils. This research has also helped to establish the biogenicity of ancient fossils, through a wide variety of tests based on field and laboratory studies in collaboration with experts from around the globe. The results have been widely published in major journals and have been used to refine models for the search for life on Mars.

My research in the Pilbara and Yilgarn cratons of Western Australia has placed me at the forefront of Archean tectonic studies, culminating with the recent publication of a book on “Earth’s Oldest Rocks” (Elsevier, 2007). I have also been guest editor for two special volumes of Precambrian Research (2004), and have authored more than 60 publications in international journals. Specifically, I have helped develop a comprehensive tectonic model for the Archean Pilbara craton over 800 Ma of crustal evolution, and recognised a fundamental change in tectonic processes on earth at c. 3.2 Ga, from vertical-dominated to horizontal-dominated tectonics, including modern-style plate tectonics.

I have presented numerous talks at a variety of international specialist and general meetings, both as an invited and keynote speaker, most recently at the European Union of Geosciences meeting in Vienna, and at Goldschmidt2011 in Prague. In 2005, together with Prof. Malcolm Walter (Director, Australian Centre for Astrobiology), I co-organised a field and laboratory workshop on early life on Earth for the international astrobiology community, which was filmed to make a NASA public education outreach program that is available for schools in the USA, UK, Australia, and is online and presented in musea. I have led numerous fieldtrips through the Pilbara Craton for a variety of groups, including the 34th IGC in 2012, 5th International Archean Symposium 2010, and Goldschmidt 2006.

I have contributed to public outreach through public lectures and contributions to several television documentaries on early Earth, including programs for National Geographic Channel (“Birth of the Earth” in 2005; “Was Darwin Wrong?” in 2006), the BBC (“Atmosphere”, 2008), History Channel (“How life began” in 2007), Discovery Channel (“Making of Continents” in 2006; “Inside Planet Earth” in 2008), and Spanish television.

1) Climate and biological change across the Archean-Proterozoic boundary, 2.5-2.2 Ga

Perhaps the most complete and best exposed geological section across the transition from early, reducing Earth conditions (>2.5 Ga) to more modern, oxidized and cooler Earth (2.2 Ga) – known as the Great Oxidation event, or GOE – is exposed in the southern Pilbara region of Western Australia as the Turee Creek Group. Research on this section to date has uncovered a spectacular section across the GOE transition, from Archean banded iron-formation to Paleoproterozoic glacial diamictites across a transitional unit of jaspilitic- to grey-laminated chert, with conformable contacts that you can put your fingernail on (Photo 1). We are currently investigating the nature of this transitional unit in detail through geochemical analysis, Fe isotopes, and redox-sensitive elements (Mo and PGE). A more expanded section has also been found in which the transition is manifest as eight cherts interbedded with iron-formations that grade to shale.

The rest of the Turee Creek Group is also under detailed investigation, particularly in regards to its sedimentology and geochemistry. Preliminary results clearly indicate at least two, and possibly three, glacial cycles, where previously only one had been recorded (Photo 2). Facies analysis indicates that each of the cycles are associated with sealevel drawdown, which can be used to infer that they were global in scope and that major climate change was associated with the rise of atmospheric oxygen.

In addition, we are investigating biological changes across the GOE. We have discovered a well-preserved assemblage of microfossils permineralized in black chert in deepwater carbonates from the upper part of the Turee Creek Group (Photo 3). These microfossils are morphologically and geochemically distinct from photosynthetic cyanobacterial communities of shallow-water stromatolites. Given the deep water setting and through comparison with modern analogues, we are able to conclude that these represent a sublittoral sulfuretum (sulfur-cycling community) – the first to be recorded in the geological record.

The Earth has evolved dramatically over time, from a hot, molten ball (magma ocean) immediately following the giant Moon-forming Impact at c. 4.5 Ga, to the cool planet of today with a dozen or so large tectonic plates that are created at mid-ocean ridges and partly recycled back into the mantle across steep subduction zones. My research on early Earth has suggested that this “modern” (i.e. steep) style of subduction commenced at c. 3.1 Ga, due to a crossover point in time when the amount of conductive heat emanating from the mantle first declined to values beneath the capacity of the crust to lose that heat. This allowed the tectonic plates to grow and to cool and thicken away from mid-oceanic ridges, resulting in the onset of steep subduction (through plate sinking).

Ongoing research into the proposed Mesoarchean change in the tectonic style of the planet includes:

Figure 1: Schematic diagram of Earth evolution through time, showing steps in crustal growth following on from pulses of mantle heat arising from the aftermath of subduction avalanches during supercontinent amalgamation that were accompanied by changes to Earth tessellation (T1-T4).

The North Pole Dome in the Pilbara Craton, Western Australia, is famous for hosting Earth’s oldest stromatolites within a well-preserved succession of sedimentary and volcanic rocks of the Dresser Formation, Warrawoona Group. Research has indicated a link between life and hydrothermal vents that formed at the tips of growth faults developed within an active volcanic caldera. However, only a small part of the formation has been mapped in detail and it is not known whether life is solely restricted to vent environments or is more broadly spread and possibly even diverse. Ongoing mapping at North Pole will document the life signatures preserved in this unique environment in 4-D and unravel the series of events within the caldera, number of hydrothermal circulation cells andvariations along and across strike in the chemistry of the system.

Van Kranendonk, M.J. (2018). The setting for the Origin of Life: A geological-geochemical perspective. The Biochemist Magazine “Science in Space” issue, Portland Press Ltd.

Papers in International Journals and Books (135)