The Mars Lab: A little bit of Mars in Australia

2013-2015: The Mars Lab,  (which utilises the Mars Yard) funded to $2.9m by the Australian federal government’s Department of Education. Partners: Led by the ACA at UNSW in partnership with the Powerhouse Museum, Sydney, and Australian Centre for Field Robotics, University of Sydney.

In Australia students can end their science education at age 16. Three decades ago 94% of students took science in Years 11 and 12. Today it is 52% and still declining. Interest levels in science in the same period have not dropped according to a substantial study by Lyons and Quinn, Choosing Science (2010).

There are three curriculum-linked education programs – 60 Minutes on Mars that take some class time to prepare for, Mars Mission 5, which needs no preparation, and Project Mars, a Project Based Learning project that take up to a term to complete. In all cases the students plan a mission using a digital tool, Mars Yard Maps, and in the case of Project Mars, that students also have a virtual spectrometer loaded with data from the Mars rover Curiosity, which is currently on Mars. The instrument allows them to see into the rocks and make assessments about rock type and context.

In addition to the education programs, the project also runs Mars-related videoconferences to connect students with real scientists and engineers.

Below: The Experimental Mars Rover Mawson, which students operate remotely from their classrooms

Below: The head of NASA and four times astronaut, Administrator Charles Bolden, and the US Ambassador to Australia John Berry, examine the three Experimental Mars rovers that run in the Mars Yard as part of the Mars Lab project. 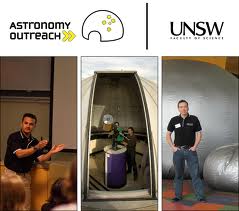 Astronomy Outreach is sponsored  by the UNSW Physics Department and provides astronomy themed science outreach events for the general public. Regular events include telescope nights at UNSW and a travelling planetarium. 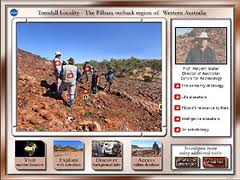 "Virtual Field Trips" are produced in collaboration with the Australian Centre for Astrobiology, ASU and NASA.